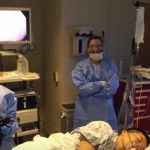 VICE on HBO: Can Feces Treat a Liver Disease?

A critical component of the mission of PSC Partners Seeking a Cure is to raise funds to research causes, treatments and cures for primary sclerosing cholangitis in both adult and pediatric patients. Since 2009, PSC Partners has channeled the generous donations made by community members to fund over $1.8 million in the most cutting-edge research at leading institutions worldwide.

In 2015, PSC Partners Seeking a Cure (acting on the recommendation of its Scientific/Medical Advisory Committee and the Board of Directors) funded a research project proposed by Dr. Jessica Allegretti at Brigham and Women’s Hospital in Boston, entitled “fecal microbiota transplantation for the treatment of primary sclerosing cholangitis.” Recently, the project was featured by HBO’s Emmy-winning documentary series VICE. Although the study is still in its very early stages, and it is therefore too soon to draw conclusions about the effectiveness of fecal transplants for the treatment of PSC, we are nonetheless delighted about the awareness that this video will promote. We remain hopeful that as Dr. Allegretti’s research progresses, we will have more concrete evidence that fecal transplantation might become a viable treatment option for patients with PSC.

The VICE video is included above. For a lay summary of Dr. Allegretti’s 2015 research grant, as well as summaries of all research projects funded by PSC Partners, please visit the Research Grants page.