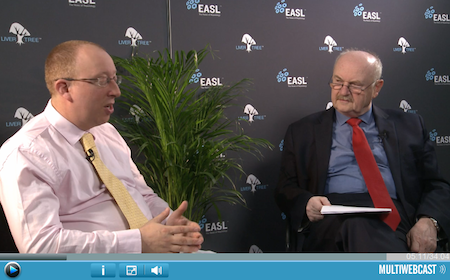 In this videotaped conversation, Dr. Michael Manns (Medical School of Hannover, Germany​) ​and Dr. Gideon Hirschfield (University of Birmingham, UK)​ discuss what they perceived to be the best presentations in autoimmune hepatitis (AIH)​, primary biliary cholangitis (​PBC)​, primary sclerosing cholangitis (​PSC)​ and secondary sclerosing cholangitis (SSC, ​the newcomer on the block) at the International Liver Congress (ILC) in Amsterdam last month. In this conversation, Dr. Manns describes PSC as “the most exciting disease, the black box of hepatology” because PSC is currently engendering the most interest in the field. They noted that PSC was the subject of the second opening session of this large congress attended by 10,000+ hepatologists, and thousands filled the hall to attend the session.

Following are the key points from the part of the conversation about PSC:

You can listen to the entire conversation here:  http://livertree.easl.eu/easl/2017/international.liver.congress/182281/prof.michael.manns.and.doctor.gideon.hirschfield.best.of.autoimmune.and.html.