Q AND A WITH CAREGIVER AND LIVE LIVER DONOR JEN RAGAINI 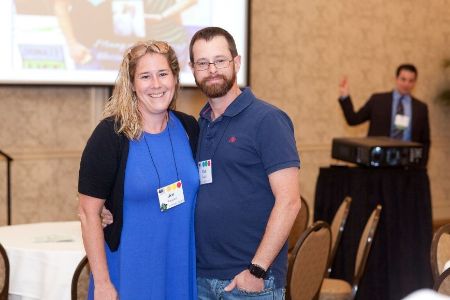 Many of you may have already heard Jen and Matt Ragaini’s story – it was featured on the Today Show in April of this year and was picked up by a variety of local news stations before Matt’s transplant to help them get the word out about the need for organ donation. (NBC news, New Haven News, Faithwire and others).

Matt was diagnosed with PSC 12 years ago.  In 2010, his PSC began progressing and he was put on the organ transplant list.  He was on the waiting list for 5 years.  As Matt’s condition grew worse, Jen began a Facebook page to raise awareness about Matt’s need and the need for organ donation overall.  By 2014, she began to worry as he grew sicker and no good options materialized.  He weighed just 100 pounds and was losing hope.  At this point, one of the doctors asked Jen if she had thought about donating a portion of her liver.  She was taken aback by the suggestion and had no idea she could be an organ donor for Matt. She never thought they would accept her as an organ donor because she and Matt have a young daughter. She looked into it immediately and was excited to discover that she was a match.  On February 10, 2015 Matt had his transplant at Yale New Haven Hospital.  Matt received two-thirds of Jen’s liver.  Today, Matt is doing great – he is back to the man she first met. As Jen put it, “He looks like grizzly man and his labs are the best they’ve ever been”.

We asked Jen if she’d be willing to share her story with the PSC community and she agreed.  Below are some additional details that we thought might be of interest.

Q: One of the things that can make living with PSC difficult is that the disease looks and progresses differently for each person.  Can you share Matt’s journey with PSC?  When was Matt diagnosed with PSC and what did the progression look like for him?

Matt had pancreatitis after having his gallbladder taken out about 15 years ago, then, 3 years later, he was diagnosed with Ulcerative Colitis and PSC while seeing a GI doctor.  They were able to diagnose him with PSC from the elevated liver enzymes in his lab work.

Life was fairly normal for the first few years after his diagnosis with few problems.  Unfortunately, for Matt, ERCPs frequently brought on pancreatitis, which would knock him out for a week, but other than that, he felt ok.  About 5 years prior to being listed for a transplant, Matt had a very strange reaction to a drug they put him on and his bowel movements turned bright yellow.  He went off this medication and slowly started getting better.  Throughout his diagnoses things that were common for Matt were varices needing banding and liver enzymes slowly creeping up.  He never had any stents in his ducts.  About 5 years after the drug reaction, his liver enzymes slowly started creeping up.  In August of 2014, on his birthday, it seemed like everything started getting a lot more serious. Soon, Matt was so weak that he couldn’t walk and required a wheelchair.  He was vomiting blood, had bloody stools and he started getting thinner, more jaundiced and much more fatigued.  He had a MELD score of 26 and was running out of time.  This is the point where one of the doctors asked Jen if she had looked into being a live donor.

We had to arrange many things to support us through recovery.  Our daughter stayed at a friend’s in the neighborhood and we had friends, family and my older son take care of us while we healed.

Matt bounced back quicker than I did.  He was in the hospital for 11 days with a feeding tube for 1 week.  “Our doctor explained that PSC took Matt’s health way down and my liver brought it back up completely”, so Matt felt much better right after the transplant while I initially felt much worse, but as my liver regenerated, I started feeling better.

Matt has only had a few issues post-transplant.  As with all transplantees, his immune system will be suppressed for a lifetime, so he is on immunosuppressants.  He had to go on blood pressure medication, because his liver hardened prior to the transplant and that made his heart have to work harder. Fortunately, he has only been sick one time since transplant.

As for my recovery, there are still times when I feel sore – I work in a factory and do some heavy lifting.  I had to go back to work 7 weeks after the surgery and spent a fair amount of time in the hospital.  Soreness was huge after the surgery and I had trouble sleeping for several weeks, but I’d do it again in a heartbeat because this process gave me my family back!  Matt and I have been married for 10 years and together for 17 years and, now, we are able to look forward to many more years together.

Q: Do you think the screening process adequately prepared you for what it means to have a liver transplant?

A: Yes, we felt well prepared. One doctor was very blunt and he drew a clear picture for us.  He said he wouldn’t do the surgery unless we got serious about our health habits and followed all of his instructions.  We had to eat properly – a lot of protein.

I was never scared because I knew this is what I had to do.  Fear never came into the picture until the very last minute when I was being transported down the long hall to surgery.

Q: What do you want others to know about PSC?

A: I don’t know, we’re still learning about it. I hate this disease – it almost took my husband from me.  I think there may be a genetic component to PSC/liver disease. Matt’s grandmother died of liver failure and I often wonder if there is a genetic connection. Everyone’s story is different. I still worry about it coming back in our lives.

I guess what I want people to know is that if you have a family member that has it,  you have to act.  When Matt got sick everything stopped and, while things are running along smoothly for now, I still dread everything getting taken away from me. With PSC, there are always ups and downs and it’s hard to get comfortable. PSC is a disease nobody knows about.  As a wife, I noticed that hospital staff always assumed Matt was an alcoholic or on drugs – this is a disease nobody knows about, so it’s important to build awareness.

Also, I want people to know that, if you get to the point of needing a transplant, dual-listing is something to look into.

Q: Has PSC impacted your life in ways that you didn’t anticipate?

A: When we got back into living a normal life, we discovered that we have many new friends. Our friends changed through this process and now we have an additional, really tight group of new friends that feel like family.

PSC has made us realize how important it is to raise awareness about the importance of organ donation.  I wasn’t a donor until my hubby started getting sick.  Since this experience, I am determined to get the word out about donation and living donation.  Matt and I are passionate advocates for living donation now and we volunteer a lot to raise awareness about it and to mentor others.  I am on the board for Donate Life. We want to make sure that others are aware of this option as we wish we had known it was an option sooner.